In my research I started looking at examples of art work done in a variety of contexts outside the “studio” including work not strictly 2-D or rectangular. I also took photos of work around my city center as a source of reference and information.

Traditionally, artists, architects and craftsmen have worked together in shaping our built environment and often the combined skills of the various disciplines created something greater than just satisfying functional requirements. 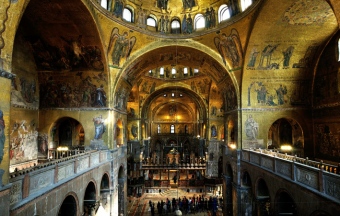 The use of terracotta as a decorative element in architecture was very popular in the late nineteenth century. Craftsmen, working to architects specifications produced interesting detailing for buildings. The above images show decorative detailing to the interior and exterior facade at the Michelin Tyre Co. building, London.

PUBLIC ART IN HOSPITALS AND OFFICES

I looked at the example of art being placed in hospitals and offices commissioned for specific spaces. I have tried to show examples that vary in scale and media. In a number of countries there is a movement toward making art an integral part of new public building through programs that set aside a small percentage of the construction and design budget for works of art. 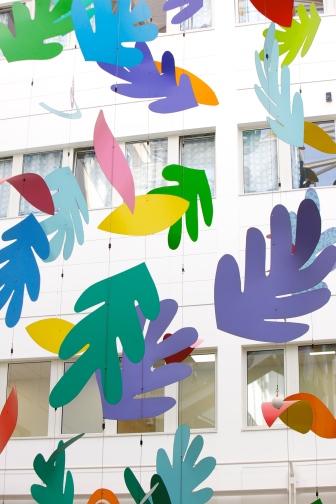 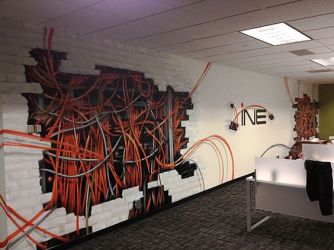 NOTES ON IMAGES ABOVE

4. The ground floor of the new Golisano Children’s Hospital based at Rochester University, U.S.A. has a lake theme with blue tones and water-inspired elements. The environments of the PET-MRI and CT scan are fashioned to look like a pirate ship and a lighthouse to help reduce stress as patients enter this area. Not sure if this image is an artist’s rendering or the real thing.

5. Large ‘monster’ sculpture that attempts to fill the large cavernous space between floor levels at the New Royal Children’s Hospital, Melbourne. Made of Steel, GFP & carbon fibre with kinetic elements.

6. This leaf shaped installation of painted steel is a welcome addition to the exterior of this rather bland looking building.

7. One of a series of three large horizontal paintings of beach scenes commissioned by painter Hurvin Anderson for the Renal Department at the Royal London hospital. Acrylics on paper, on board.

8. Office mural for a company in Seattle. This is intriguing, at first glance I thought this was made with fabric strands on wood, then probably plastic tubing but it’s actually a spray painted image.

9. To launch the new hospital building programme at The Royal London, artist Pae White was commissioned to create a temporary billboard screen taking as its inspiration the ticker tape parades of her native USA.

10. ‘Tales of the Oceans’ mobile sculpture, stainless steel and aluminum, by Uri Dushy in the Ocean Financial Center, Singapore.

11. Inside the Jack London Square Headquarters of Navis, a world-leading shipping logistics company. The strong angles of the finishes were designed to recall compass points, sails, and nautical flags. There is an interesting relationship of the wall panel with the shapes, colours of the light fittings and furniture.

12. Bridget Riley, corridor mural at St Mary’s Hospital, London. This, in contrast with the last image is monotonous and doesn’t convey to me anything uplifting to the spirit. Hope my ward is on another floor!

13. Social area created in this corner of a conference room in a refurbished apartment in Poland, made primarily from polished triangular pieces of ply. 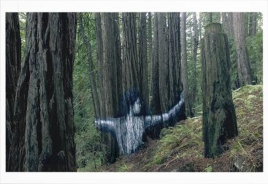 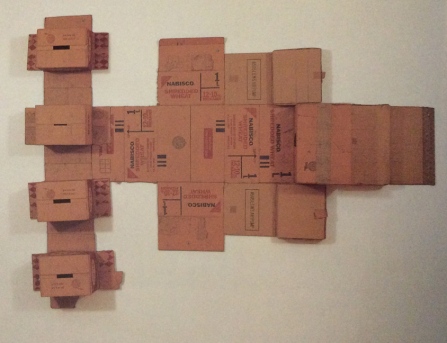 NOTES ON IMAGES ABOVE

14. Eduardo Paolozzi, mosaic mural on the London Underground system. His work referenced images of the entertainment culture, rushing commutors and the urban economy.

15. 2/3D piece by artist Richard Smith. Smith’s work, with his strong sense of colour, shape, pattern and texture could have enriched more people if the work had been placed in a wider public context than just the gallery.

17. This is really interesting, this temporary image done in a remote forest on fire damaged trees using natural chalk pigment which washes away with water.

18. Mural for Unipart factory, Coventry by Sue Ridge. This is also very interesting. The artist uses bold bright colour, simple shapes and motifs presumably related to the products or materials the factory uses in an effort to humanise this vast space.

19. Olaf Breuning, Clouds, for The Public Art Fund | Central Park South and 59th Street. An installment in the Central Park ‘plaza’,New York. Clouds is a 35 feet tall aluminum and wood sculpture meant to resemble the childlike imagination and naiveté of school play backdrops.

20. Sue Ridge, Euston Station Banners 1994. Commissioned by the Contemporary Art Society for Intercity British Rail Community Unit. The six 4 metre tall rolled aluminum banners were developed to withstand issues of vandalism and comment on the everyday issues of commuting as going into battle.

22. Robert Rauchenburg, Rodeo Palace, 1975/6. These two pieces I saw recently at the Tate Modern. I can image these being adapted some what as part of temporary installations in a site specific space. Could be interesting experimenting more with found objects and materials.

23. Interesting community arts project with individuals creating with one piece of a jigsaw puzzle that comes together as a whole. Seems to have gone viral. 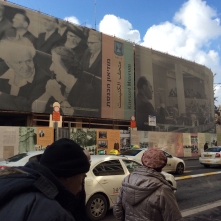 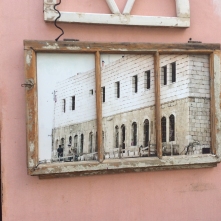 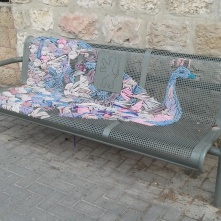 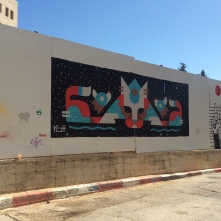 The above are various art works I photographed in public spaces around my town. I don’t feel I need to say too much about them as I have covered a lot of ground already. Some of these images, while interesting in themselves, don’t have much context to the immediate environment. The mural in Image 25 seems an integral part of the building, seems to have always been there. The figures in the mural, though not very clear in the photo, are local people the artist drew or photographed.

I was initially planning working with a group of autistic youngsters but felt, to make it worthwhile I would need more time than the scope this current project allowed. So in light of some of my textural research I decided to think about a site specific work at a nearby shopping and commercial centre which I am pretty familiar with. This was not a live project but gave me the opportunity to explore ideas and media, to come up with a proposal which might work if implemented.

The Clal Building — arguably the ugliest building in Jerusalem, is a 15 story office tower and shopping mall completed in 1972, the first such mall in Jerusalem and now widely viewed as a commercial and architectural failure.

Initially there was a high occupancy rate but , over time, with the development of more modern and well designed malls and shopping centres, many companies and businesses moved out and stores closed through lack of business.

There are now attempts to revitalise the space, mainly due to the efforts of a non profit group, an organisation bringing together artists, social activists, initiators etc. with the belief that art and creativity can bring about sustainable change. The group have taken over a location at the top of the mall’s spiral they named The Terrace., planned as a meeting and exhibition space and where various courses and workshops are held.

In thinking about what kind of art work and theme, I started sketching in the streets and popular market near the building to get a feel of the local community. The original building on the Clal site was a vocational arts and crafts school and I thought of including some of this history in a mural or painting but didn’t pursue this. I had been looking at the urban, stylised paintings of Stuart Davis and Jacob Lawrence and created a few images that if blown up large had the potential to be quite interesting. 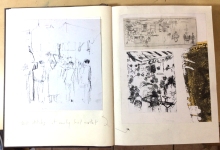 I took another diversion after seeing a local exhibition of paper works and started to think about the possibility of a relief work or banners that could be viewed at various floor levels.

I began to play around with simple shapes and bold colour, looking again at Matisse’s cutouts, thinking about creating very long or tall banners that would be suspended from the ceiling and divide up the vast space of the central atrium. I also started thinking about adding birds as a motif in the designs. Image no. 42, is a simulation of what the banners would look like in the space. 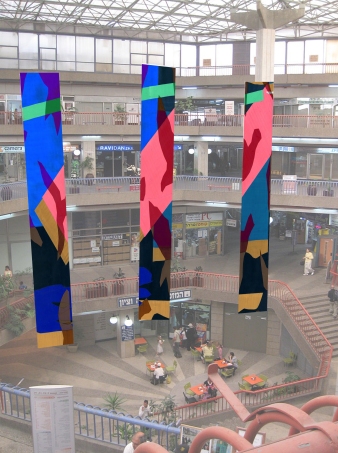 I decided to explore further as I wasn’t convinced that using an urban community theme was the best solution. Looking again at previous research I thought the idea of introducing nature or the outside world into the building using the bird motif could be a more fun and interesting thing to do. Birds can often be seen flying around the top of the building because of holes in the corrugated plastic roofing. Started to consider the idea of a large mobile installation of simple bird shapes to be made of aluminum and painted in bright colour. suspended on steel rods.

Not having the money or time right now to work with the actual materials, I developed sketch ideas and made up a card model to simulate the installation which I photographed.

Below, is a simulation of the installation in the building with a (fake) promotional poster advertising it. (This actually looks more interesting than the original mockup!)

I enjoyed this assignment despite initially not having a clue which direction to go in. I probably spent more time on the textural research than was necessary as there was more I wanted to experiment with in my sketchbook than I had time for. Looking at the range of work found in hospitals and offices was stimulating – would be nice to receive such a commission.

In future work, it would be worthwhile spending more time on the initial drawing, coloured sketch phase and seeing what can emerge from this. Also exploring other media more, even if it doesn’t lead to a final object/result. Working up some of this early work on a larger scale could have been worth exploring more, even though this was not the direction I took the project, likewise, with the banners. The banners work better when the design is less busy and complicated.

I was pleased how the bird theme installation emerged and could see it developed in other sections of the building using different elements and media. It’s not the most visually exciting thing but the link to the natural environment was probably a good way to go for such a drab building. I am not convinced the installation would actually work in the Clal building itself because it’s such a large cavernous space, probably work better in a smaller environment. I hope to revisit some of the earlier work done in my sketchbook, as for me, this holds more interest.